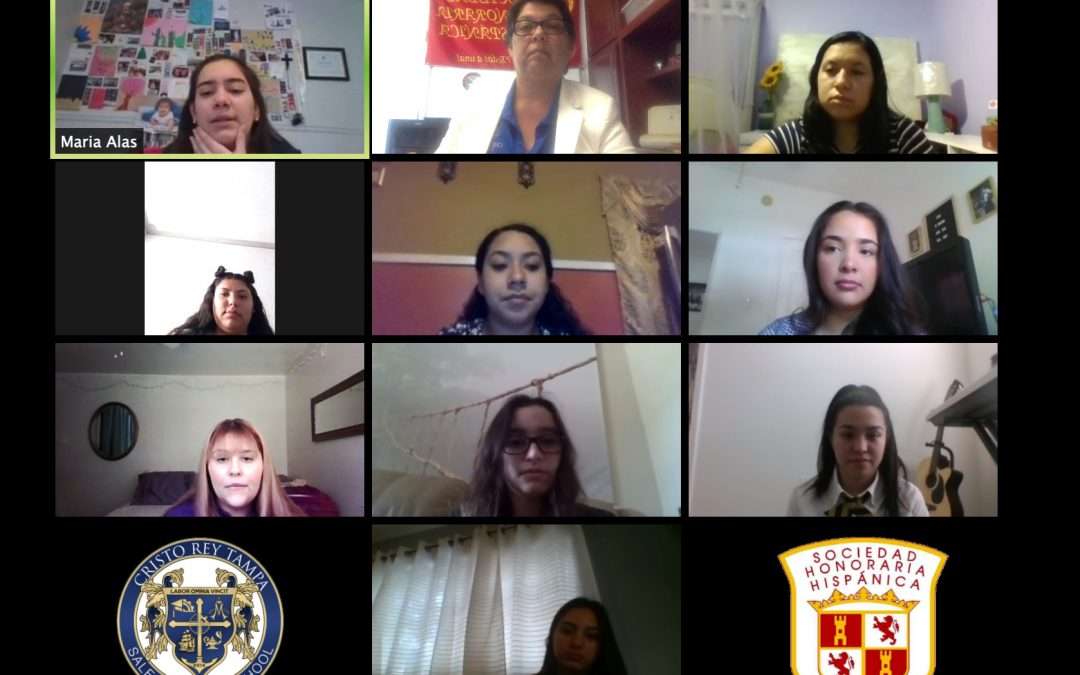 This Spanish Honor Society was founded by the American Association of Teachers of Spanish and Portuguese in 1953 for the students of North American secondary schools. Our chapter is due to the efforts of Mrs. Martha Osorio, who established it in February 2020. The name of this chapter is Alejandro Casona. Our motto is “All together,” and our colors are red and gold. Our insignia and seal are those of the mother association. The mission of the honor society is to recognize high school achievement in Spanish and Portuguese and to promote interests in Hispanic and Luso-Brazilian studies.

CRT students in grades ten and higher, who have maintained a 3.0 GPA in the study of Spanish for a minimum of three semesters, are eligible to become members. During the Zoom session, Secretary Ashley Villegas presented four candidates for induction: Bella Albarrán-Cornelius, Jennifer García, Miurel Zamor, and Angélica Zuluaga. During the ceremony, each candidate was presented a candle representing the course of life, and they recited the poem Excelsior by Gaspar Núñez de Arce. As each candidate’s name was called, they were instructed to blow out the flame of their candle but not their spirit.

The all-female group, full of spirit and smiles, sat proudly in front of their laptops during the induction. They also know that with this honor comes work. Their passionate leader, Maria Alas, has goals for the group and wants this group of scholars to be highly visible on campus and a resource for her classmates. Maria shared, “My goals for the group are to help our members continue an interest in the Spanish language and to help others in the school advance their Spanish studies by having the society members tutor  struggling students.”

Congratulations to the Sociedad Honraria Hispánica!