Though the end of this school year has been different, the traditions and student recognitions at Cristo Rey Tampa Salesian High School stay the same. As a tradition, each year ends with an All School Mass and awards. While the delivery of the All School Mass was virtual, students were still recognized by the Salesians of Don Bosco and President Morreale for their accomplishments.

Sarai N., ’20, received the Don Bosco Award for excellence in Christian witness and living the Salesian spirit. Sarai shows strong evidence of living the core values of Salesian spirituality. She is a student worker at Tampa General Hospital and daily, she exhibits joy, gratitude, loving-kindness, integrity, and faith.

Francis C., ’21, received the Dominic Savio Award for his excellence in Christian service and generosity to others in need. Francis, a student worker at Connect & Propel Tampa Bay, gives of his time through service at school in various ministries during and after school.

This year, two new awards were also introduced. Fr. Franco Pinto, SDB, Director of Mary Help of Christians Center, introduced the Director’s Award. This award is presented to a student who displays a high degree of caring, superior grades, and devotion to spiritual needs in youth ministry. The inaugural award was given to Cindy G., ’21, who is a student worker at Connect & Propel Tampa Bay. Cindy could not attend the Mass due to AP testing.

President Morreale introduced the President’s Award. This award is given to a student who displays outstanding student leadership on and off campus. The recipient of the inaugural award was Maria A., ’21, a student worker at Metropolitan Ministries.

Congratulations to our award recipients and to the Class of 2020 for starting it all! 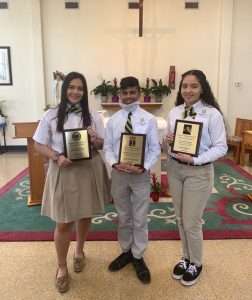 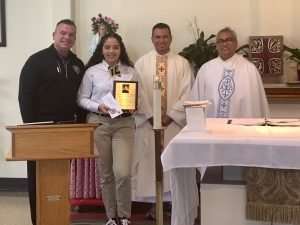 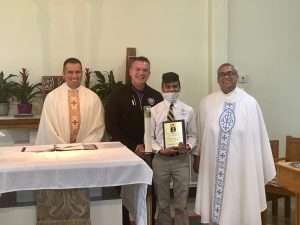 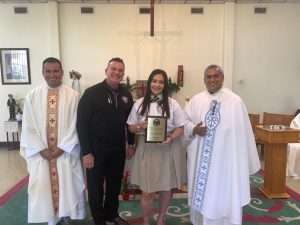